During hunting season in Wisconsin from mid-September to December, we have a bounty of venison meat in the big freezer in our basement. Last Christmas, as additional gifts to the kids (grownup kids) we gave them pounds of frozen packed venison hamburger plus a few pounds of frozen packed tenderloin steaks to take home with them.

My man is a seasoned hunter; he hunts deer, guts them out in the woods and brings home the carcass and the heart. He has certain way of butchering and packaging venison as well as his little celebratory ritual, as I call it.

As soon as he gets back to the house and drops the carcass in the shed, he starts making his celebration meal. He takes the deer heart in the kitchen, washes and slices it; seasons with salt and pepper; pan-fries it in a very hot cast-iron pan with butter; and eats it just like that. It’s a hunter’s feast, he said. Ok fine! He never asks me to try it; he knows I’m not too crazy on offal or internal organs.

Anyway, going back to my kitchen; I had to cook a lot of venison during and after hunting season. And I’m still cooking venison in the middle of winter – from plain hamburger to chili, casserole, spaghetti, stew, meatloaf, roast, smoked, and now Venison Jerky.

Jerky is lean meat with fat trimmed off, cut into strips, and then dried to prevent spoilage. Normally, this drying includes the addition of salt, to prevent bacteria from developing on the meat before sufficient moisture has been removed. People usually use curing salt but I used celery salt in this recipe, it’s a natural alternative. Also, I didn’t have a jerky gun so I made the jerky old school technique.

I actually tried two techniques to compare the result – half of the recipe is made using the regular dehydrator with single temperature setup and the other half through oven-dried technique. The result was really interesting and varied. The dehydrated venison jerky turned out more leathery in texture with more moisture but shorter shelf life of 3-4 days at room temperature. White oven-dried jerky turned out crunchy, less moisture but with longer shelf life of 1-2 weeks at room temperature.

Cooking Procedures
1. Use mortar and pestle or food processor to crush the fennel seeds.
2. Add in all the spices and red pepper flakes and slightly crush it all to blend.

3. Mix together the ground venison and pork.
4. Add in minced garlic, salt and pepper, brown sugar, and all the spices. 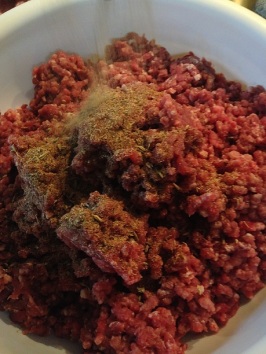 5. Add Worcestershire sauce and mix the meat very well for at least 2 minutes. 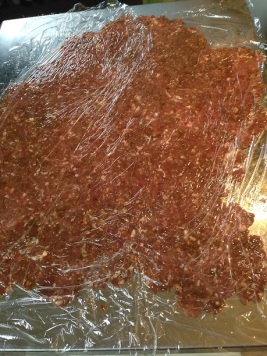 8. Top with plastic wrap and use rolling pin to spread the meat evenly.

9. Use pizza cutter to mark lines every 2-inch width.

10. Take the plastic wrap slowly and carefully off the meat surface.
11. Use metal cake spatula to transfer jerky strips on dehydrator. 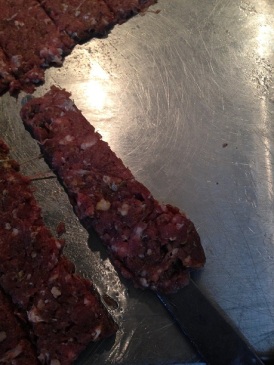 13. If you don’t have a dehydrator, use the oven. Lay the jerky strips on baking sheet with wire rack.

14. Set the oven at 160F and let it dehydrate for 4-5 hours. Make sure not to shut the oven door completely. Prop it slightly open with a wooden spoon.

Either way you do it, through dehydrator or oven-dried, the venison jerky will turn out snacking good and appetizing! 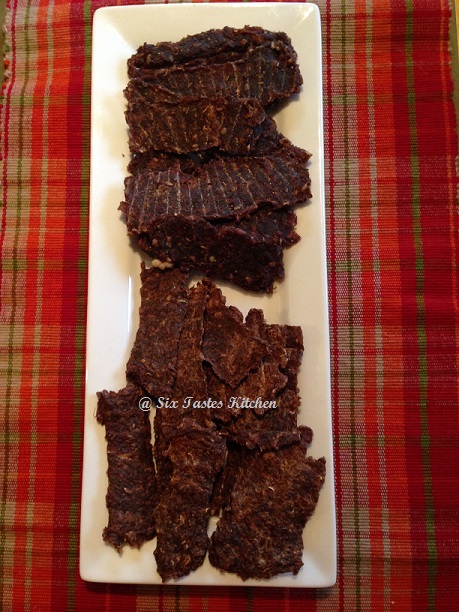 One thought on “Venison Jerky”